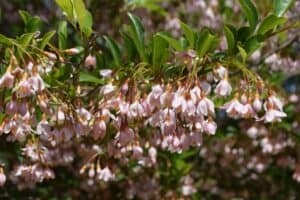 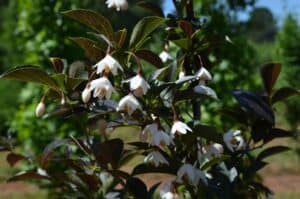 So what is next/new? A sleeper species, Styrax japonicus, Japanese snowbell, is visible on the horizon, now receiving justifiable attention from breeders and the nursery industry. The first snowbell was incorporated into our Urbana, IL garden in ~1974; in Georgia, seedlings, ‘Evening Light’ and Marley’s Pink® reside. The latter flower in late April-early May; a month later in Urbana, thus extending the small flowering tree experience.

Styrax japonicus is native to Japan, Korea, and China where it grows on forested slopes from 1,300 to 6,000’ elevation. Significant differences in cold hardiness are known, with Korean material considered the hardiest. Typically, the species is assigned hardiness zones 5 to 8. Under cultivation, the habit is oval-rounded to broad-rounded. Size ranges from 15 to 30’ high and wide although weeping and columnar types are now in cultivation. Bark is smooth, gray, with shallow, orangish brown, interlacing fissures, similar to serviceberry bark. 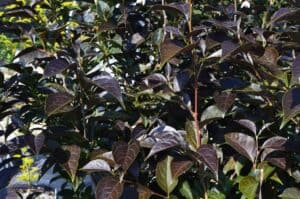 The ovate to elliptic-oblong leaves, 1 to 31/2” long, ½ to 12/2”wide vary from dull green to lustrous dark green, thin to leathery, seldom developing significant fall color (yellow-green), although Snow Charm® from Schmidt Nursery produces beautiful yellow-gold fall color, at least in the Pacific Northwest. New foliage colors have been identified with the rich maroon, chocolate-bronze of ‘Evening Light’ and the white-margined, green-centered, ‘Frosted Emerald’. The former has been utilized to breed a weeping purple leaf selection which, as I witnessed it, will increase the gardener’s heart rate. 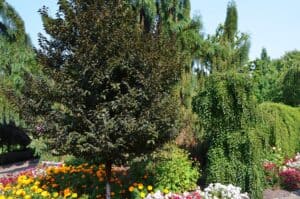 The white, 5-lobed flowers are borne in clusters from the leaf axils, often along the length of the shoot. Each 3/4” high and wide flower is held on 11/2” long pedicel, akin to spiders dangling from webs. Since flowers are borne after leaves emerge and under the shoots, the ideal place to site the tree is where traffic will walk under or look into the branches. Flowers are effective for ~10 days, consistently opening in early may in the Dirr garden; a month later in Boston. Fruit is an ovoid, gray, dry pubescent drupe; the shiny brown seeds dehiscing as the outer cover cracks and deteriorates.

Seeds require extended warm: cold stratification periods. Seeds I collected in October, 2016, in Virginia, germinated in the bags in February, 2018. Cultivars are grafted and suckers/shoots from the understock can develop and require removal.

References point to the species as a degree fickle under cultivation. Tendency to either have early sap flow or leafing and a late freeze injures the cambium. I have observed this in ‘Emerald Pagoda’, with large leathery lustrous dark green leaves. However, based on numerous sightings of worthy species specimens from Boston, Chicago, Louisville, Atlanta, Athens, Spartanburg to Portland, OR, the species has national roots. In fact, a specimen in the Arnold arboretum is over 100-years-old.

Any well-drained soil, acid to near neutral, sun to partial shade will suffice.  Trees are readily transplanted from containers or balled-and- burlapped. Once established, trees display high drought tolerance.

Cultivars are increasing, especially from American breeders. An abbreviated list of the best follows. I have grown or observed all.

‘Evening light’-a true garden treasure with the purple-maroon leaves, becoming maroon-green and holding color into fall. The abundant white flowers with maroon calyces contrast beautifully with the foliage. More upright habit than species; estimate 15’ by 6 to 8’.

‘Pink Chimes’-consistent prodigious pink flowers on a 15’ high tree. Foliage is smaller than typical but sheeny dark green. Endured heat and drought for over 20 years at the University’s horticulture farm and has always flowered. Report from Pacific Northwest mentioned performance less reliable than the white-flowered tree forms. 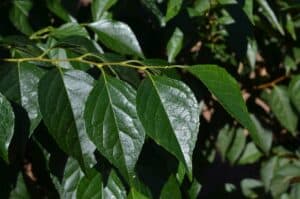 Prystine Spire (‘MTFSJ’)-remarkable columnar selection, 20 to 25’ by 5 to 8’, with lustrous leathery dark green foliage and glistening crystal white flowers. New to the market in 2018-19,