Bonnie and I spent a few days at Hilton Head during the week between Christmas and New Year’s. At our fourth-floor condominium, the view from the balcony/porch was part beach but primarily treetop green, the latter Quercus virginiana. The species is the dominant noble tree on the island and efforts to preserve it in the throes of relentless construction activities were remarkably successful. Homes, condominiums, and commercial properties literally mesh cheek to jowl yet are largely shrouded/screened from street view by the majestic oaks. Hilton Head Island has strict Tree Ordinance regulations to protect and preserve this and, what are termed, Specimen Trees. The specifics of the Tree Ordinance are available at hiltonheadislandsc.gov/development/natresources.crm.

I have visited every coastal southern state from Virginia to Texas, and throughout encountered majestic live oaks. Perhaps, the most impressive was the Angel Oak on St. John’s Island, South Carolina, the canopy covering 17,000 square feet, estimated 300 to 400-years-old. I stood there in awe, mesmerized by the architectural majesty and had my picture taken next to the tree (see photo in 2012). Perhaps, the most well-known Live Oak is the iconic specimen at the Augusta National Golf Club between hole 18 and 10. The finishing 18th hole at the Master’s and the Tree are internationally known and beloved.

Let’s dive in and explore what makes the species so magical. More than any other feature, the rounded to broad-rounded, wide-spreading, arching sturdy branches, often draped with “Spanish moss”, render the tree unassailable by the forces of nature. I worked in Charleston after Hurricane Hugo and this and the native palm, Sabal palmetto, were the least affected. To be clear, there was damage on live oak, and large branches that were pruned, developed new shoots and covered the wounds of wind.

Live Oak is 40 to 80’ high at landscape maturity with a 60 to 100’ spread. The national champion, located in Live Oak (actually Savannah), Georgia, is 78’ high, 161’ in crown spread, with a trunk circumference of 440” (last measured in 2019). The location is easily referenced on Mapquest.  Obviously, it is not a wise choice for small properties. What I find so remarkable is the secondary spreading branches, as large as a “normal” tree trunk, are steel cable strong and flexible. At one time, the government held maritime forest of live oak in Florida to use for ship building. The wood is the heaviest of all oaks, a cubic foot weighing 75 pounds.

The massive trunks and branches are an ecosystem unto themselves. I remember the epiphytic bright green resurrection fern, Pleopeltis polpodioides, blanketing the tops of the branches of the Angel Oak. The ferns do not extract water or nutrients from the host plant. When dry, the fronds shrivel and turn gray-brown, only to “resurrect” themselves when moisture is available. The bark is brown-black, vertically and horizontally fissured, with the texture of alligator hide. Quite easy to identify a mature live oak from a distance by habit, low slung branches, and bark pattern.

The mature evergreen foliage is saturated lustrous dark green, persisting into spring, abscising as the new olive-green foliage unfurls. Leaves average 1 to 3” (5”) long, ½ to 1/1/2” wide, the leaf undersides grayish, the margins revolute (rolled under).  The juvenile foliage on seedlings has spiny margins and looks nothing like the mature foliage. I have grown numerous seedlings and the leaves resemble a spiny holly in appearance. The foliage displays a measure of salt tolerance.

The acorn is torpedo/bullet-shaped, ¾ to 1” long, brown/black, maturing in a single season as it is a member of the white oak group. Fruits ripen in fall and should be collected when turning brown.  I noticed significant weevil infestation manifested by tiny circular holes in the nut. Birds and animals eat the acorns. A partial list includes northern bobwhite, Florida scrub jay, mallard, sapsuckers, wild turkey, black bear, squirrels, and white tailed deer.

The species is native from Virginia to Florida, west to Oklahoma and Texas, into Mexico. Found in coastal sandy soils, to moist rich woods. Trees on Jekyll Island, Georgia, sculpted by the wind and salt spray, lower on the ocean side, taller behind, and appear to be leaning toward the beaches.

In part 2, I will discuss the hybrids, propagation, production, landscape uses, botanical varieties, and cultivars. 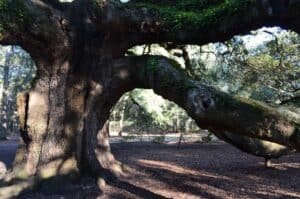 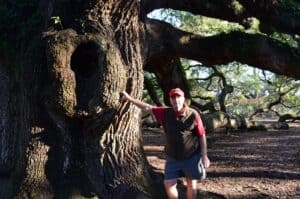 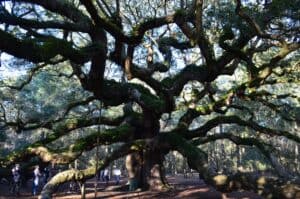 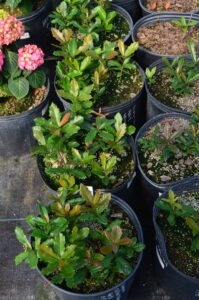