Cornus is a fascinating genus with species ranging from groundcover habits (Cornus canadensis) to large trees (Cornus controversa). I relate to students and garden visitors that if one dogwood is recognizable, then all can be. The leaves (primarily deciduous, several evergreen) are linear-ovate to ovate to broad ovate, margins entire (no teeth) with veins originating from the midvein and then turning toward the apex, almost paralleling the margin.  When the veins are and gingerly teased apart, rubbery strands are evident. Cornus alternifolia and C. controversahave alternately arranged leaves; all others opposite. Now the trick is to accurately identify the ~60 species. 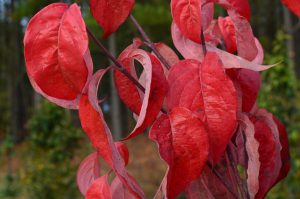 Formalities out of the way, let’s enjoy what Cornus offers the nursery and gardening world. The large bracted species are the focus herein and include C.  capitata, C. florida, C. kousa, C. elliptica (evergreen), C. hongkongensis (evergreen), C. nuttallii, and hybrid species C. × rutgersensis, and C. ×elwinortoni. I have grown and/or observed all the species listed.

The large bracted tree dogwoods offer an extended season of flower production. In the Athens, GA, Cornus florida is the first to open, often by mid-March. Seedling trees flower at different times and continue into late April. Cornus kousa picks up in April and continues into May along with the hybrid cultivars of C. ×rutgersensis and C. ×elwinortonii, followed by C. elliptica and C. honkongensis in June. I had no success with Cornus nuttallii, a West Coast native, but have seen it in flower in August around Portland, OR. It is a parent in the C. ×elwinortonii hybrids which include Rosy Teacups®, Starlight® and Venus®. This blog discusses Cornus florida.

Cornus florida, flowering dogwood, is one of the finest, native flowering trees, ranging from southwestern Maine to Florida, west to Michigan, eastern Oklahoma, Texas into Mexico. I most often see native populations in the understory or at its edges. In landscapes, trees in full sun may prosper depending on degree of maintenance, i.e., water and freedom from weed eater damage. A study reported that dogwoods were greatly impacted by borers when trunks were injured by weed eaters and mowers. The best open-grown landscape trees are often mulched and protected from mechanical damage. 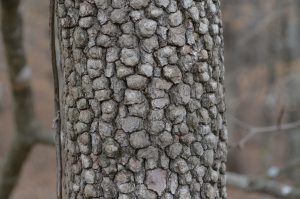 I have grown numerous seedlings and have been disappointed by mildew, anthracnose, lack of quality flowers, and short-term persistence. Several shining lights include members of the Appalachian series, especially ‘Appalachian Joy’, which for 13 years in the present garden has prospered. ‘Appalachian Blush’ and ‘Appalachian Snow’ performed well in the University of Georgia trials. I am also partial to ‘Cherokee Brave’ (pink) and ‘Cherokee Princess’ (white) which, though older selections, are quite resilient.

The origins of the Appalachian series resulted from the dogwood anthracnose disease (Discula species; discovered in late 1970s) which was killing trees on Long Island. President Reagan noticed trees dying in the Catoctin Mountains around Camp David and soon research dollars became available to breed resistant C. florida. Resistant trees were discovered in the wild and in nurseries, with the University of Tennessee instrumental in their introduction. ‘Appalachian Joy’ was identified among one million seedlings in Decherd, TN, in 1995. Unique in that bract numbers range from 4 to 8 and often overlap, the standard being four. ‘Appalachian Spring’ was a survivor seedling in the Catoctin Mountains. Four bracts do nor overlap, and it is resistant, not immune to the disease. I estimate Appalachian series cold hardiness in the zone 6 to 8 range, although have noted trees for sale in central New Hampshire and successful landscape trees in Boothbay, ME. 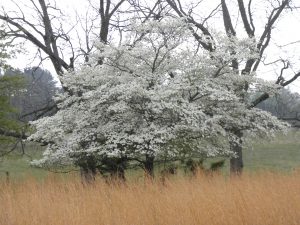 Cornus florida is multi-season beauty, the glistening white flowers, the cherry red, rugby-ball shaped fruits, brilliant red fall color, and the best dressed winter habit of any small flowering tree. The bark develops the blocky, alligator-hide characteristic at a young age, which makes for ready identification. Habit is typically rounded to broad-rounded, ranging from 15 to 25’ high and wide, the National Champion is 33’ high, 40’ wide. The fine stems are gray, burnished red/purple and, in winter, glow in the afternoon sun, when back-lighted. The gray-brown biscuit-shaped buds terminate the pretty stems.

Foliage is medium to dark green in summer, 3 to 6” long, half as wide, with ~6 to 7 vein pairs. In autumn, yellow, red and combinations paint the tree. The foliage is frost resistant (~25°F) with the colors persisting into late November (Athens). Foliage is susceptible to drought stress so provide moist, well drained, clay-based soils and mulch to conserve moisture. Leaf margins turn ash-brown and the entire canopy droopy when drought-stressed.

Inflorescence ranges from 2 to 4” (5”) diameter, composed of four white bracts, and a central core of true yellow fertile flowers. Each flower borne on a short spur and spackling the plant in glistening white. Peak flowering time is early to mid-April in Athens. A few trees open in late March; others in late April. Flowers open before or as the leaves are emerging. 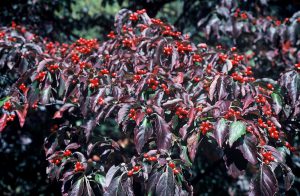 Fruit is a glossy red, 1/3 to ½” long, rugby ball-shaped drupe, borne in multiple numbers in a “cluster” at the end of a short stalk, color developing in September with fruits still present in December. Favorite food of birds and 43 species were reported to eat the fruits. Should mention that color develops with leaves still green, persisting and camouflaged by the red fall colors, then visible when leaves abscise. If interested in germinating seedlings, collect fruits in October-November, remove pulp and provide cold-moist stratification for 90 days. Nursery producers also plant in fall, cover with sawdust/soil, with germination in spring. Wise idea to float seeds to determine soundness (viability). If they float, then discard. Sinkers can be planted or stratified.

Tremendous interest in developing C. florida cultivars for reliable performance in zone 4 and 5. The species is considered “safe” in zones 5 to 9 but this is dependent on cultivar selection. In October 2022, I visited Hidden Hollow Nursery, Belvidere, TN, and was told about a hardy selection from Green Bay, WI.  It is now being propagated. A former student from Farmington Falls, ME, recently mentioned a dogwood that flowers reliably every year. Perhaps this is the ONE (zone 4)! Flowering dogwood selections/cultivars are budded on seedling understock in summer. Trees reach 2 to 4’ in height the following fall and are sold as bareroot liners.