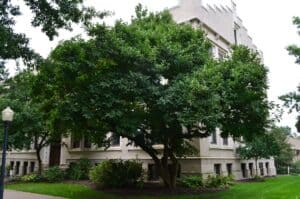 The hope of spring is tethered to this species and the many cultivars. Difficult to imagine a garden, park, campus, golf course, city street, commercial property almost anywhere in the U.S. without a least one saucer magnolia. From Chicago to north Florida to the West Coast, the species can be successfully grown. The late Roger Luce, Newburgh, ME, curated an extensive collection of saucer cultivars, maintaining records on performance, especially cold hardiness. ‘Amabilis’, ‘Brozzonii’ and ‘Verbanica’ survived -28F without injury. Others were killed to the ground. In Georgia, ‘Brozzonii’ and ‘Verbanica’ have been heat and drought tolerant. Thus, within the genome of M. x soulangeana there is wide berth for successful culture. Adaptability ranges from zone 4 to 8(9) with intelligent cultivar selection. 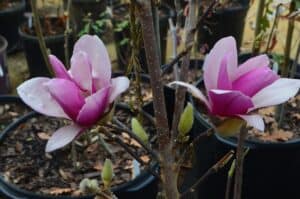 This is a hybrid of M. x denudata (tree, white flowers) and M. liliiflora (shrub, vinous purple flowers) which first flowered in 1826 in France where it was bred by a French soldier, Etienne Soulange-Bodin. Through the years, many cultivars were introduced, for example ‘Brozzonii’ in 1873. ‘Alexandrina’ (introduced 1831; personal favorite), ensconced in our Georgia garden for 10 years, reliably sets copious flower buds each year, opening to deep rose-purple outside, pure white inside in February-March. The flowers are often singed/destroyed by low temperatures, with 25 to 28F turning them to brown mush. In early March, 2019, with the tree in full flower, a low of 28F did the deed. Every spring new growth pushes forth with flower buds visible in June-July for the next year. No doubt, many of the cultivars are confused and ‘Alexandrina’ is offered in three colors with the upright habit, dark flowered form the real and best option. 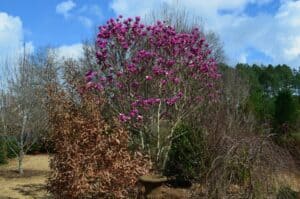 Magnolia x soulangeana reaches 20 to 30’ high and wide, more often with multiple trunks, the bark smooth, gray and similar to beech. ‘Lilliputian’ is more upright and grows half the size of the species. ‘Kiki’s Broom’ and ‘Verbanica Broom’ are smaller, shrubby types derived from “witches brooms”. I grow both and appreciate the fact they form/set numerous flower buds as small plants. Both could be fashioned into small 8 to 10’ tall trees. 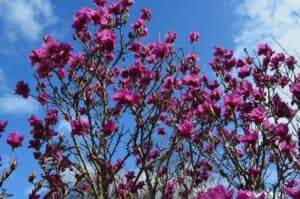 Foliage is not spectacular, medium to dark green, no appreciable fall color, dying off yellow on occasion. Flowers are large, 5 to 10” across when fully open, composed of ~9 tepals, somewhat fragrant, appearing on naked branches, sometimes with sporadic rebloom in summer. Colors range from pure white, pink, rose, maroon to red-purple. The outside of the tepals more colorful than the interior. 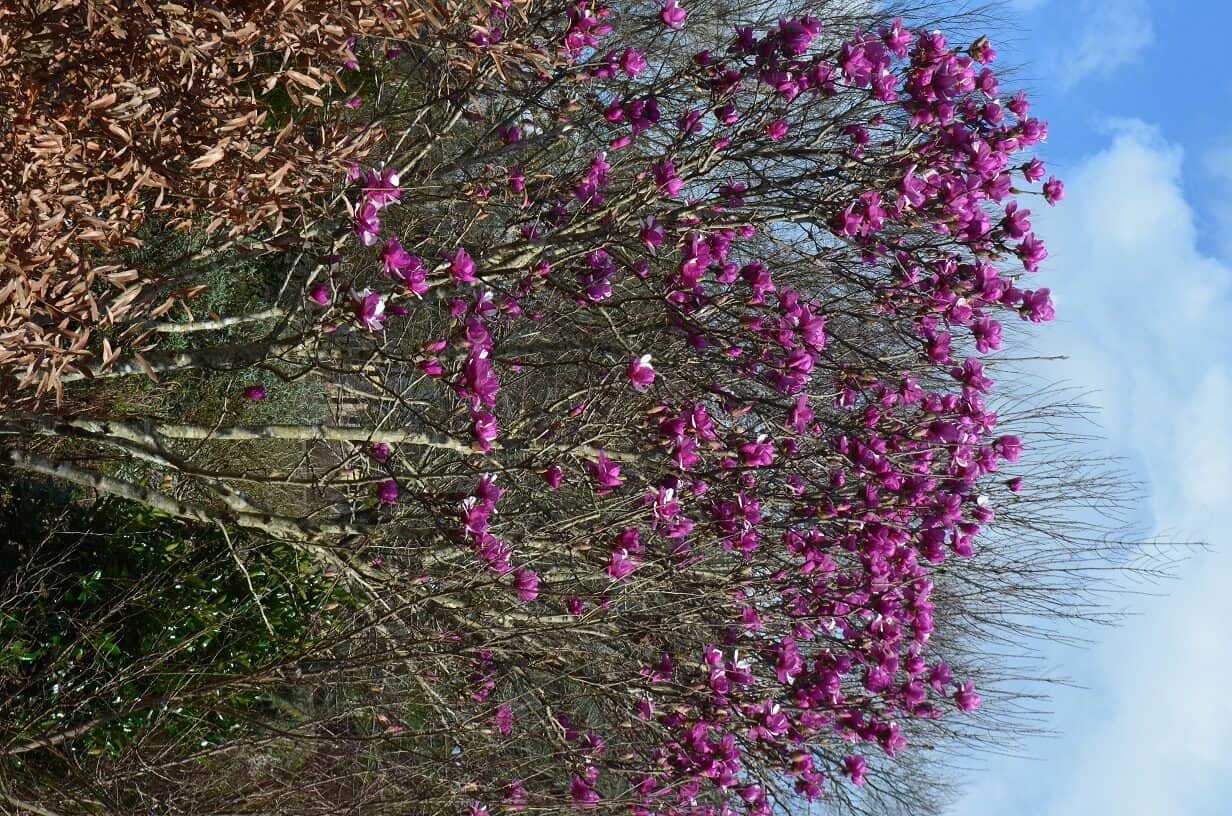 The flower buds are large, ½ to ¾” long, fattened toward the base and covered with a single gray pubescent scale. There is no best time to prune but, if necessary, accomplish same immediately after flowering. Later in the season or during winter results in flower bud loss. I have collected fruits and grown seedlings to flower with nothing better than the parent. Seeds require 90 days, cold moist stratification to break dormancy. Cuttings are a reliable way to reproduce the best cultivars but the rooting process may take 10 weeks or more. Cuttings do not root like those of hydrangea.

The greatest frustration is the sensitivity to cold and Dr. Tom Ranney, North Carolina State University bred a later pink flowering selection, Mercury® (‘NCMX1’), the flowers opening 3 to 4 weeks after the typical cultivars. The plant is now available in commerce. 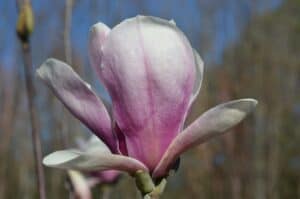 I could elaborate for several more pages on the numerous cultivars but the above discussion frames a reasonable portrait of one of the world’s best flowering trees.