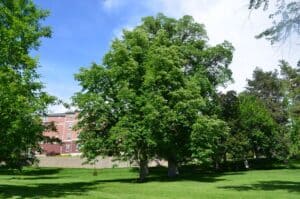 Such a great tree, reaching its zenith in the southern Appalachians, with trees 80 to 100’ in height. Most often found in moist hardwood coves on slopes and along streams, often in the company of mountain-laurel and rhododendron. The species is also common along the Blue Ridge Parkway where it occurs at the highest elevations, ~6,000’. For unknown reasons, the tree is not common in commerce, primarily available from specialty nurseries. Compared to its European counterpart, Aesculus hippocastanum, common horsechestnut, it is significantly more disease resistant (still may contract the disease). The disease initiates brown lesions which coalesce into large brown blotches. Often visible by mid-summer and, in the case of the European horsechestnut, turns the entire tree brown. 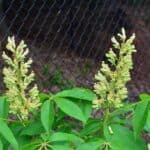 The emerging foliage ranges from green, deep bronze to maroon, maturing dark green. Leaves appear early, usually by late March-early April in zone 8. Leaves are large, composed of 5(7) obovate, finely serrated leaflets, each 4 to 6” long. In autumn, leaves develop the most beautiful pumpkin-orange color. The inflorescences develop with the foliage, opening yellow-green, are borne upright, and average 6 to 8” in length, 2 to 3” wide. Flower effect is somewhat diminished as the yellow-green blends with and is lost among the maturing leaves.

Fruits are pear-shaped, 2 to 3” long smooth brown capsules containing 1 or 2 shiny dark brown seeds. I have grown many seedlings by collecting the seeds when the outer leathery covering splits, and the brown seeds are visible. Sow immediately into well drained medium in containers or seed beds and protect from pesky squirrels (critters). The carrot-like root develops soon after sowing; the shoot emerges the following spring. 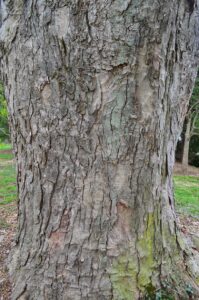 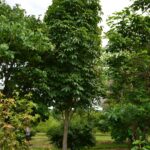 Young trees are slightly pyramidal to rounded; higher than wide at maturity, with coarse-textured branches. The bark is gray-brown, smooth initially, later developing large flat plates and scales. The exfoliation pattern is similar to a mosaic. This is truly a noble species and I observed magnificent specimens in Spring Grove Arboretum, Cincinnati, OH; Gettysburg National Cemetery; Washington and Lee, Lexington, VA; Utah State University, Logan, UT; University of Oregon, Eugene, OR; and the garden of Coach Vince Dooley, Athens, GA. Sizable trees grow on the Iowa capitol grounds, Des Moines. The species and/or a hybrid with A. glabra, Ohio buckeye, is reported hardy in North Dakota. I estimate zone (3)4 to 8 adaptability.

In June, 2016, at the USDA ARS germplasm repository, Beltsville, MD, several friends and I spied a distinctly columnar seedling (see photo) which will have a home where space to spread is restricted. This unique form is currently being propagated and evaluated by Schmidt Nursery, Boring, OR. 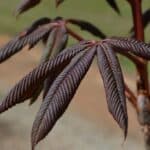 The species displays moderate heat and drought tolerance, but prefers evenly moist, well drained, acid soils, in full sun to moderate shade. The beautiful tree on the Utah State campus, where high ph is an issue, makes me think the species is well adapted to alkaline soils.  In the wild it often exists as an understory plant, attesting to its shade tolerance. Seedlings are fast growing and under reasonable landscape culture expect 1 to 2’ per year in height increase. Pruning requirements are minimal. The wood appears to be strong and I have yet to witness storm-damaged trees.

Here is a species ranging from New York to Georgia west to Illinois and Mississippi that has languished in the shadow of its European cousin. For large properties, parks, campuses, corporate sites, golf courses, wherever space is abundant, the species deserves consideration. Not recommended for street tree use as fruits and leaves are messy.