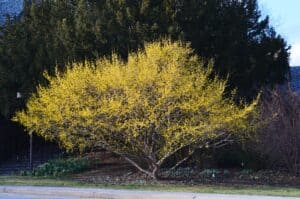 The Japanese cornel dogwood is a beautiful small tree, the yellow flowers borne on spur-like naked stems months ahead of the foliage, harbingers of Spring’s awakening. I suspect after the 2020 pandemic, people are looking for signs of hope in the New Year. Gardening provided that to a large segment of U.S. society in 2020 and signs point to robust plant sales in 2021. I have always grown tomatoes, peppers, cucumbers, squash and the like but those are spring-summer ephemeral pursuits. Woody plants offer year-round presence with foliage, flowers, fruits, bark, and architecture/branching patterns. Few trees have the floral persona of Cornus officinalis and, walking the garden on 1-12-21, the flower buds opening, exposing the mustard yellow petals, inspired me to pen this essay. 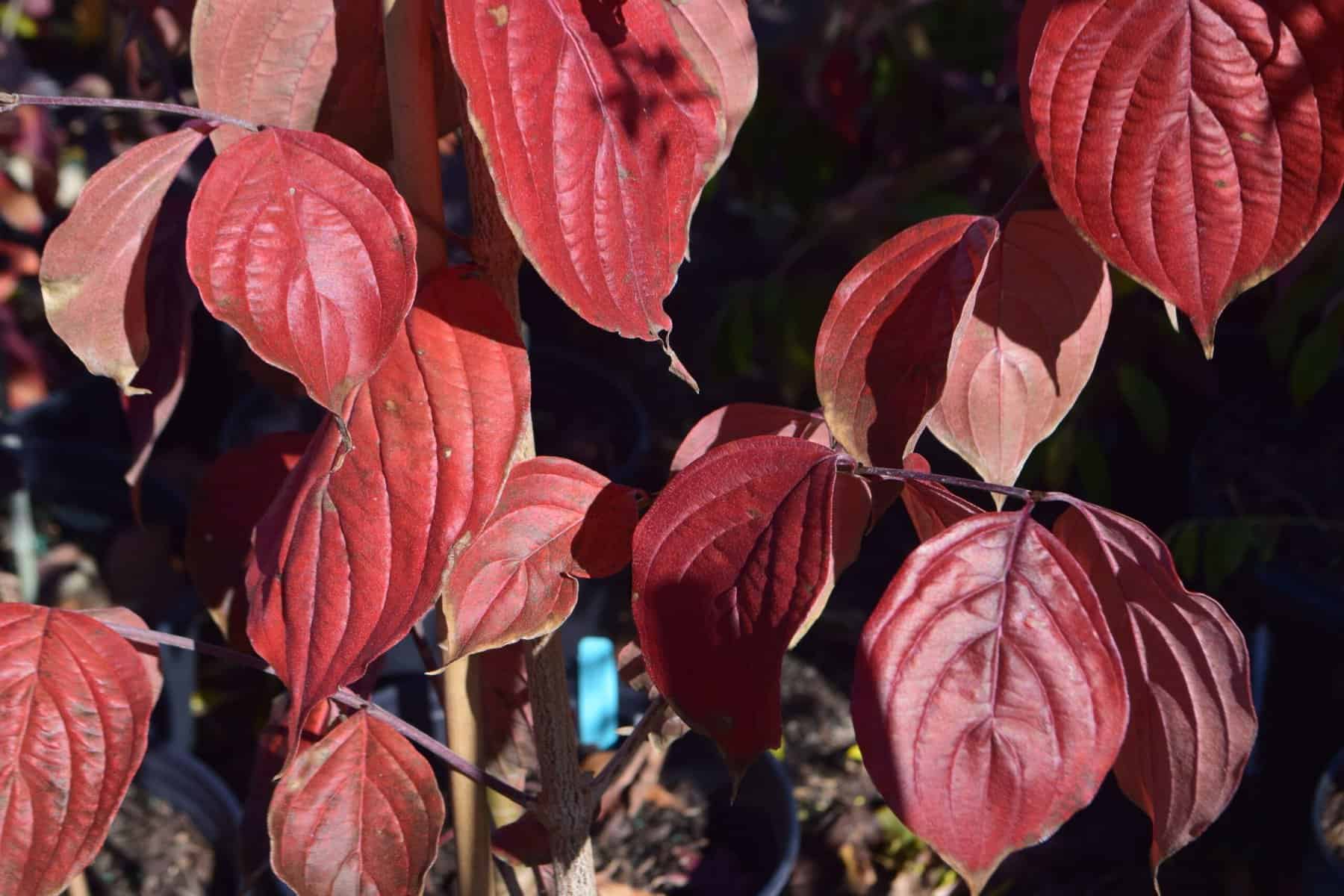 The species is restrained in habit, 15 to 25’ high and wide. The majority of specimens I cataloged were wider than tall. The Secrest Arboretum, Wooster, OH, reported a 46-year-old tree was 22’ high and 35’ wide. A specimen in a local Athens garden is 18’ by 22’. In many characteristics, the species is similar to Cornus mas, Corneliancherry dogwood, except flowers are 7 to 14 days earlier, the fruit matures later (September), the foliage may have brown tufts of pubescence in the lower vein axils, and the bark exfoliates in rich gray, brown and orange. The bright cherry red fruits are rather insipid and have not been domesticated for culinary purposes like those of C. mas. The winter silhouette is more refined than C. mas.
The foliage is lustrous dark green and may develop reasonable red -purple fall color. A selection (‘Morton’) from the Morton Arboretum, Lisle, IL, colored pretty red in the Dirr garden. The foliage is insect and disease resistance, persisting into October-November in zone 8. 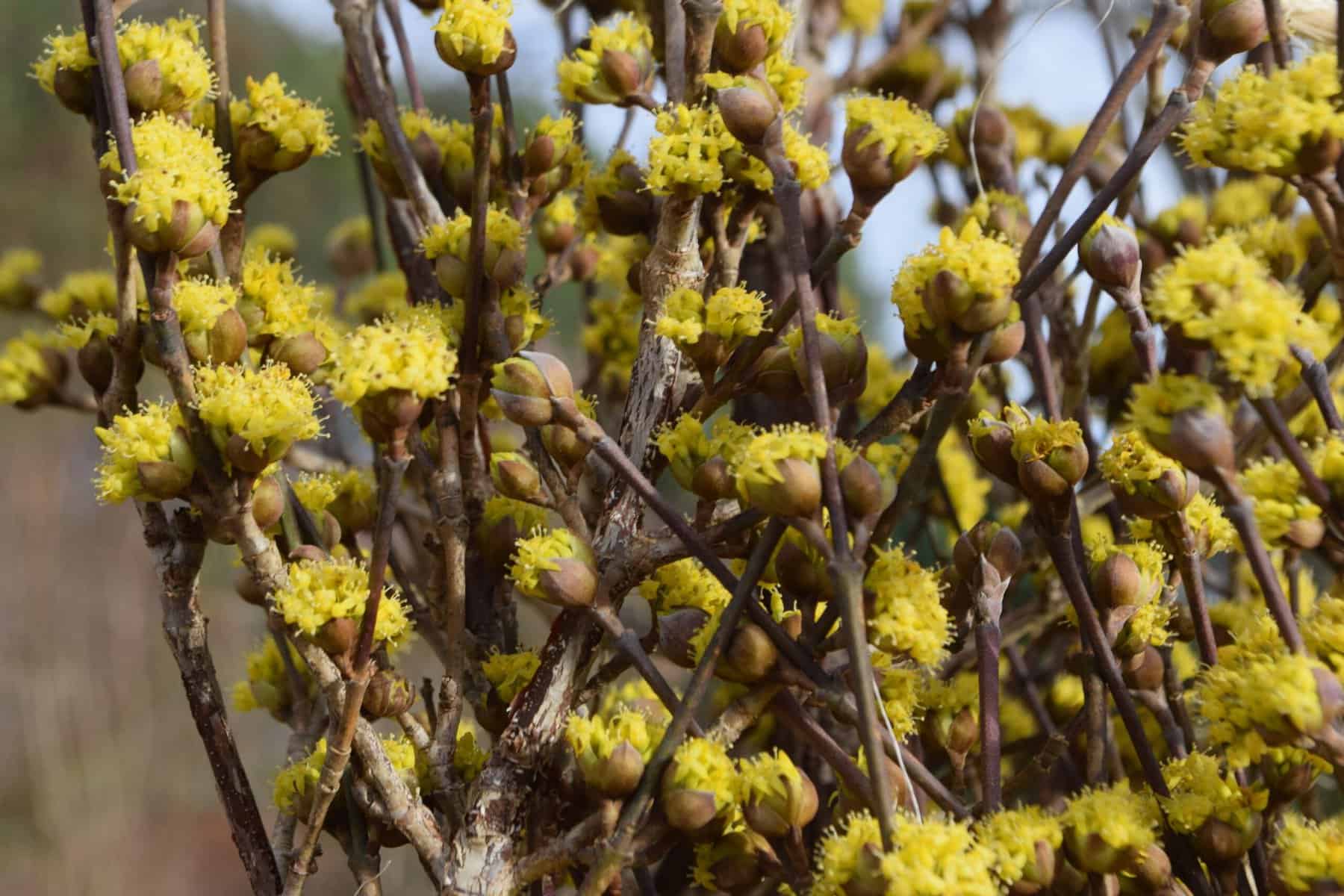 Flowers peek through ¼” long, rusty brown, pubescent, rugby ball-shaped buds in January-February, fully open in February-March and long persistent. Inflorescence is an ¾” wide umbel carrying 1/6” diameter, sulfur/mustard yellow flowers in supernumerary abundance. The tree, from a distance, glowing yellow when most trees and shrubs are in winter’s gray/brown garb. Fruit is a cherry red, oblong drupe, ½ to ¾” long, ripening in late summer. At the U.S. National Arboretum, fruits persisted into March as flowers were opening (photo). The fruits are called “zhu yu” or “zoa pi” in Chinese medicine and prescribed as an astringent tonic for impotence, lumbago, vertigo and night sweats.
Culturally, the species is adaptable to extremes of soil except wet. Container-grown material is readily transplanted and Bold Spring Nursery, Hawkinsville, GA, provides B-and-B of ’Kintoki’. Hawkinsville is 100 miles south of Atlanta and trees I observed on 11-9 were lustrous dark green with no sign of heat stress. The reader might surmise I am building a case for use, North and South. In my Manual, zone 5 to 8 was ascribed to the species. I believe it could be moved into lower zone 4. In the Chicago area, Roy Klehm, championed the species through Song Sparrow Nursery, and introduced at least four selections (see cultivars). 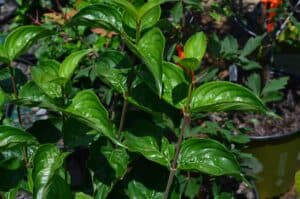 Propagation from cuttings has been hit or miss for the author. Germinated many seedlings which formed flower buds in the second year. The cultivars are either grafted or rooted from cuttings.
Native to Japan and Korea, covering almost the whole of Japan; two-thirds of Korea. In China, habitat is described as forests, forest margins and mountain slopes, from 1,300 to 7,000’ elevation. Considering the extensive geographic range, it is surprising more wild-collected material was not introduced in the U.S.
Cultivars: The following are listed in the literature with only ‘Kintoki’ widely available in the U. S. 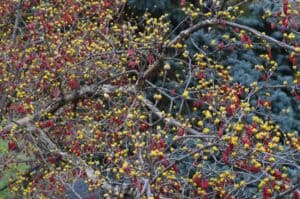 ‘Aurea’ from the Netherlands is described as having golden yellow leaves with shades of green mixed with the yellow. Have not seen and the description makes little sense.

‘Issai Minari’ flowers heavily as a young plant.
‘Kintoki’ produces abundant bright yellow flowers in early February in the Dirr garden. Reliable year-in, year-out. Upright in youth, more open at maturity. Bark is more exfoliating than everyday seedlings.
Klehm’s introductions include Cheer™ (‘KROY’), Joy™ (‘LROY’), Red Sentinel™ (‘KLMQQ’), and Rugged Charm™ (‘KLMII’). Rugged Charm™ has lustrous dark green foliage (no fall color) and has been a reliable performer in the Dirr garden. I also grow Red Sentinel™. All are listed as 15 to 25’ high. No longer offered as Song Sparrow is closed.
‘Lemon Zest’ (‘Morris Arboretum’) has superior flower size.
‘Morton’ is red fall coloring selection from the Arboretum. I was given a plant for testing and, indeed, fall color was pretty red in the Dirr garden. Do not know release date or fancy name. It was derived from open-pollinated seed.
‘Robins Pride’ produces extraordinary quantities of large yellow flowers. It is listed in the Royal Horticultural Society Plant Finder 2020.
From Tennessee comes ‘Sunsphere’ with earlier flowers. n action. 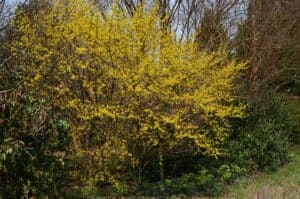