Touted as the biological savior for stressful environments since the introduction of ‘Bradford’ in January, 1960.  Profuse white flowers in spring, shining dark green summer foliage, turning red to red-purple in fall endeared it to landscape architects, gardeners and nursery producers. It was considered a non-fruiting introduction as the species 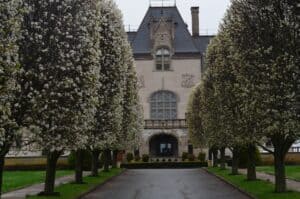 is self-sterile and requires out-crossing to develop fruit and viable seed. Other introductions soon followed, all planted from Maine to Florida to the west coast. The various cultivars produced fruit and viable seed which were disseminated by predators, mammals, deer and hungry birds. Fallow fields, fence-rows, highway interchanges, and untended landscapes became the refuge for new seedlings. These seedlings were precocious, flowering and fruiting at ~three-years of age. The horses were out of the barn and would likely never be corralled with totality.

I have cataloged escapees (in the millions) from Connecticut to Georgia, literally throughout the southeast into the Midwest. In our beautiful Oconee County, GA, undeveloped subdivisions have become pear nurseries (see photos). The species is inherently adaptable, surviving, heat, drought, cold, heavy clay soils, acid to alkaline reactions, and full sun to partial shade. Almost bullet-proof as the suckers (shoots from roots) quickly develop when a tree is cut down or removed.  Additionally, the spur-like thorns on wild trees make pruning and elimination a battle. Another major Achilles heel is the branch structure which predisposes trees to breakage.

So where are we in the war on Callery pears?  They will never be totally eliminated.  The inoculum is too prevalent and geographically widespread. There is tendency to cast blame/aspersions toward the nursery industry but it was the federal government who first collected P. calleryana to breed fire blight resistance into fruiting pears. This proved a dead-end, leading to the ornamental and cultural attributes fostering breeding and selection. The USDA released ‘Bradford’, ‘Whitehouse’ (introduced 1977) and ‘Capital’ (introduced 1981), the latter two terrifically disease-susceptible. Many introductions followed based on the early reports of this species’ urban “toughness”. The invasive potential was not even a twinkle in the introducers eyes. 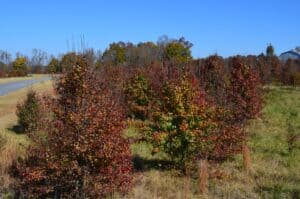 Although still available in commerce, it should be phased out of production, the eventual goal to completely eliminate the species and cultivars. I never thought I could be so definitive about an invasive plant, but Callery pear is a biological disaster. Dr. Tom Ranney, North Carolina State University, released a sterile Callery pear, Chastity™ (‘NCPX2’), the fertility reduced by 99.14%, with high resistance to fire blight. I believe the Callery pear’s many noxious habits preclude this introduction being widely accepted and utilized.

For anyone interested in the pear’s history, I recommend “The beginning of a new invasive plant: a history of the ornamental Callery pear in the United States.” Available on-line from the journal BioScience 57 (11): 956-964. 2007. I found this to be a reasoned and rational discussion without the proverbial bomb throwing.