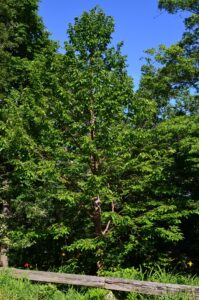 With the loss of Fraxinus, ash, to emerald ash borer and no resistance among the 22 U.S. native species; the uncertainty of long term performance of disease-resistant American elm cultivars; and the invasive issues attached to Norway maple and other species, new tree genetics are necessary.

I first witnessed 20 to 30’ high trees at Longwood Gardens in 2012/13 and actually begged for a few seeds. Was rejected on the basis that the species was collected in the wild from China and the host country needed to be reciprocated (assume with royalties), so could not share material. Continued sightings at the National Arboretum, Arnold Arboretum, Morris Arboretum and a west coast nursery indicated the species was being shared/distributed (without concern for reciprocity). All trees observed to date were higher than wide, similar to Tilia cordata in habit, the largest trees 35 to 40’ high. In its native habitat, trees reach 80 to 100’. I estimate 40 to 60’ by 30 to 40’ wide under cultivation. 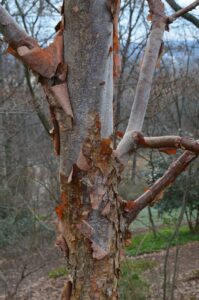 Bark is quite remarkable, akin to that of Acer griseum, paperbark maple, exfoliating in curls and papery sheets. Colors range from light brown, copper-brown to deep chocolate-brown. Exfoliation occurs on two-year-old stems through large trunks. The tree is more beautiful in winter than in leaf. 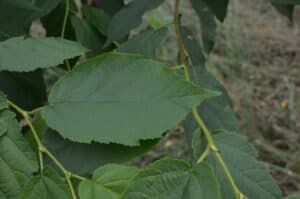 Leaves are 2 to 4’’ long, 1 to 2’’ wide. Medium green, turning yellow in fall, shaped more like an elm leaf than the typical rounded Corylus outline. Foliage has shown high heat and drought tolerance. The summer of 2016 in Athens, GA was the hottest on record with no rain for extended periods. Two, four-year-old trees in the Dirr garden showed no foliar stress.

Flowers occur in March on naked stems; the male in drooping 2 to 4” long, reddish brown catkins; the female barely visible at the tip of the bud. Fruit is a 1/2” diameter hard-shelled, edible, globose nut held in a 2 to 4” long tubular sheath (involucre). The Morris Arboretum shared numerous nuts with the author which, 4 years later, are still germinating. I continue to manipulate the pre-germination treatments that will produce uniform percentages. Seedlings grow rapidly, 4 to 5’ in a season. Cuttings have been almost impossible to root. 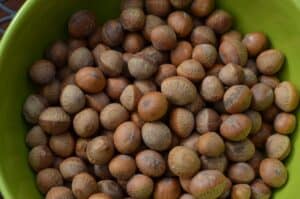 To date, Japanese beetles have not been an issue (a problem on Corylus). No foliar diseases or insect damage have been observed/reported. The species is resistant to eastern filbert blight, a fungal pathogen which devastates Corylus avellana, especially ‘Contorta’, Harry Lauder’s walking-stick. 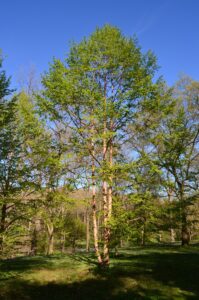 The species is cold hardy in the range of -20 to -25 F and is well adapted to zone 8, Athens-Atlanta. Trees in Chicago, IL, Boothbay, ME, Boring, OR, and Athens, GA attest to adaptability. Any well-drained soil preferably on the acid side is suitable. Trees in heavy shade are more open than those in full sun. Container-grown plants are easily transplanted.

The tree is available in commerce. Grafting and budding have been successful as has tissue culture propagation. Several vendors include Heritage Seedlings, Salem, OR and J. Frank Schmidt Nursery, Boring, OR.